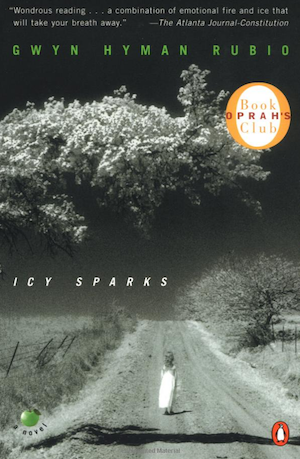 A New York Times Notable Book and the March 2001 selection of Oprah's Book Club®, Icy Sparks is the sad, funny, and transcendent tale of a young girl growing up in the mountains of Eastern Kentucky during the 1950s.

At the age of ten, Icy, a bright, curious child orphaned as a baby but raised by adoring grandparents, begins to have strange experiences. Try as she might, her "secrets"—verbal croaks, groans, and physical spasms—keep afflicting her. As an adult, she will find out she has Tourette's Syndrome, a rare neurological disorder, but for years her behavior is the source of mystery, confusion, and deep humiliation.

Narrated by a grown-up Icy, the book chronicles a difficult but ultimately hilarious and heartwarming journey, from her first spasms to her self-acceptance as a young woman. Curious about life beyond the hills, talented, and energetic Icy learns to cut through all barriers—physical, mental, and spiritual—in order to find community and acceptance.

“The influence of Harper Lee and Carson McCullers is evident in Gwyn Hyman Rubio’s remarkable debut novel ... A lesson of tolerance and respect is learned by all who meet Icy, and her enchanting spirit will touch even the hardest of hearts.”

“Rubio is a writer of uncommonly warm and tender vision, often comic, brimming with love and hope ... an entertaining and absorbing story.”

“Icy Sparks speaks to us in an entirely new voice, painfully wise and wonderfully peculiar. In her original first novel, Gwyn Rubio makes us see that the tics and noises her remarkable heroine can’t suppress are the pure expressions of a brave and lively spirit.”

“A most original work of fiction. Icy Sparks is an important contribution to the literature that helps us know the emotional realities of wounded people. It is also one of the few novels of the Appalachian region that goes beyond the description of external reality and places the reader in direct touch with the interior lives of its characters. Brilliant.”

Stephen Dobyns, author of The Church of Dead Girls

“Gwyn Hyman Rubio twists together her dark and comic visions to create a world so marvelous and strange that it takes one’s breath. Her subject is the entanglements of order and disorder in a rural Kentucky setting of the 1950s, and she turns them upside down in a way that challenges our own definitions of where and how we live. She is an extraordinary writer.”

"This grand novel knocked me on my teakettle. It is at birth a classic of Appalachian literature and I think it will take its shining place in American literature.... What a grand person Icy Sparks is! The pages of this novel seem to turn themselves as the narrative glides gracefully from sorrow to sorrow, from joy to joy. Gwyn Hyman Rubio is a marvelous writer. Too grateful to envy, I admire and applaud her triumph and hope that everyone will share it with me.”

Through the glass door, I saw the sunlit streets of Ginseng with its buildings traced in gray, coal’s bold signature. Ginseng had always been prosperous. Through coal’s boom and bust, it liked to brag on itself. It bragged about Samson Coal and the contracts that kept its miners working even during hard times. It bragged about young Dr. Stone and his brand-new office that stayed busy with soon-to-be mothers, victims of car accidents, miners with black lung, and sick folk who didn’t have to travel all the way to Lexington for treatment anymore. It bragged about being the county seat, about having a movie theater and decent schools. It bragged, bragged, and bragged, all the while averting its eyes from the nooks and crannies deep in the hills where life could be hard, where good and bad times depended upon the price of coal and the future plans of the coal companies. Pressing my hands against the glass, I stared at Ginseng Full Gospel Baptist Church, stuck between Willena’s Café and Dr. Stone’s new office, and spotted the Church of Nazarene, inserted in the tiny space behind Schooler’s Funeral Home. In town there was no root cellar in which to hide, no shadows to eclipse my fears. The many churches, squeezed into corners, offered little refuge. They were for righteous, truthful people. As I twisted the doorknob, turning around to wave good-bye, feeling lonely, I remembered Miss Emily. As the sun’s warmth burned through the glass and caressed my skin, I knew that Miss Emily would not betray me. Although lately I was too scared to trust anyone, I knew that the child inside her would not turn on me if she caught me jerking. Hadn’t her soft fat arms always sheltered me and kept me warm?

Long before I met Miss Emily, I had heard about her strangeness. At Comb’s Restaurant on the river, I had heard the townsfolk gossiping. “She comes by it naturally,” they’d say. “Both her parents were fat. Huge tubs of lard.” At Margaret’s Bakery, I had listened to housewives whispering in superior voices, “She buys three dozen sweet rolls every morning and eats all of them at once.” The men at the barbershop snickered and said, “No God-fearing man will marry Miss Emily. If she took to hugging him, he’d be squashed.” Women at Stoddard’s Five and Dime milled around the lingerie, held up pairs of underwear, snorted, and said, “They don’t make panties big enough to cover Miss Emily’s broad behind.” Then they’d giggle, cup their hands over their mouths, their eyes darting from side to side, and feel pleased with themselves and the unanimity of their attack.

At six, I hadn’t understood everything I’d heard, but I had understood the sound of disdain and knew it was mean. In spite of this, I hadn’t connected such meanness to the people expressing it, but rather to the one at whom it was directed. So when Patanni first took me to Tanner’s Feed Supply and asked me to come inside and meet a really nice woman—Miss Emily Tanner—I had been afraid.

She was in the backroom sorting out corn feed as we had walked through the door. When the bell above the doorway jangled, I had jumped back. “Patanni,” I whined, my toes trembling inside my shoes, “I don’t want to. Can’t I just wait in the truck?”

“I reckon not, Icy,” he said, grabbing my hand and pulling me forward. “I brought you over to meet Miss Emily and you’re gonna do just that.”

“What if she don’t like me?” I said, straining in the opposite direction.

“What if she don’t like me?” I repeated, leaning so far toward the door that my grandfather’s fingers popped.

“Doggone it, Icy!” Patanni barked. “Straighten up. The woman ain’t no witch.”

“But she’s fat. Her bottom don’t fit inside regular underwear.”

“So?” my grandfather said. “What does her bottom have to do with her heart?”

“She eats three dozen sweet rolls every morning,” I spewed out. “She’s too fat. She could crush a person if she hugged her.”

“Shush!” Patanni cut in, holding a finger up to his lips. “Mind your manners.”

From the back of the store, I heard wood scraping along a floor and heavy breathing. Suddenly Miss Emily laughed loudly. “What she laughing about?” I asked, tightly squeezing Patanni’s hand. “Ain’t nobody back there with her.”

“Maybe she enjoys her own company,” my grandfather said. I swallowed hard and nodded. “Maybe she’s a nice woman who likes to laugh.”

“Maybe—“my grandfather went on, but stopped short when he saw Emily Tanner, red-faced and sweating, emerge from the backroom. “Hello, Miss Emily,” he said, extending his hand.

Ignoring my grandfather’s hand, she grinned broadly and said, “Mr. Virgil, I’m gonna hug you instead.” Then she lunged toward him, wrapped her huge arms around him, and clasped him ferociously to her chest.

“I heard my grandfather groan, saw his head buried in her blue plaid cotton dress, and her face, all bunched up and creased with fat. My heart raced. My palms began to sweat. I could see myself suffocating in Miss Emily’s quicksand of blubber, and I stammered, “Not me, oh no you don’t!” Releasing his hand, I inched toward the door and threatened, “You ain’t gonna squeeze the life out of me. You ain’t gonna squash me.” Quickly, I pivoted on my toes and ran.

“I’m gonna hug you, too!” Miss Emily squealed, chasing after me, her flesh crawling forward like a blue-stained snowdrift. And before I realized it, she had snatched my shirt and was pulling me toward her, right into her rotund arms. But instead of moaning from pain, I had groaned from pure delight, cognizant only of her sweet warmth.