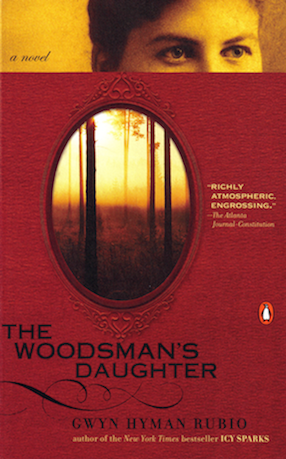 The Woodsman’s Daughter, a richly absorbing tale of a gothic South that, like Icy Sparks, has another unforgettable heroine at its heart.

Dalia is the brassy and beautiful eldest daughter of Monroe Miller, a shrewd turpentine farmer in 1800s southern Georgia haunted by a devastating secret. A resilient and resourceful young woman, Dalia strives to create a better life for herself and will stop at nothing to protect her family, but the sins of the father are never far behind.

In this spellbinding, page-turning epic, Rubio brings the swaying pines, humble shantytowns, and insular bustle of small-town living vibrantly to life. The Woodsman’s Daughter is certain to cement Rubio’s reputation as a major southern voice in American fiction.

Praise for The Woodsman’s Daughter

“Talk about a dysfunctional family! Dalia Miller, the title character of Gwyn Hyman Rubio’s stunning second novel, The Woodsman’s Daughter, is the only survivor of her family of four: her father, Monroe, a self-made entrepreneur in the turpentine business of the South Georgia piney woods who is haunted by a sexual indiscretion that may have infected him and his family with syphilis; her withdrawn, drug-addicted mother, Violet; and her blind sister, Nellie Ann, whose half-life is finally cut short by the grotesque flowering of her father’s earlier philandering in Savannah.”

“In this captivating epic, set in post-Civil War southern Georgia, Gwyn Hyman Rubio, the acclaimed author of Oprah selection Icy Sparks, sweeps us into a world where upper-class wealth intersects with the poverty of laboring shantytowns, a place where terrible human suffering manifests itself.”

“Woods of longleaf pine and a family in trouble give rise to The Woodsman’s Daughter. South Georgia at the end of the 19th century is the starting point for author Gwyn Hyman Rubio, and she spins a tale that follows one young woman along a rocky road from youth to maturity.”

“'The sins of the fathers are visited upon the children,’ says the main character at one point in The Woodsman’s Daughter. That paraphrase from the Book of Exodus sounds the theme of Gwyn Hyman Rubio’s new novel.”

“Apparently undaunted by the overnight success of her debut novel, 1998’s Icy Sparks—an Oprah Book Club pick—Gwyn Hyman Rubio returns with The Woodsman’s Daughter, an engrossing novel that affirms the Versailles, Ky., author's genius for those little gestures that lend her novels a cinematic quality.”

Booklist, the review journal of the American Library Association

“Rubio’s follow-up to her Oprah-anointed debut novel Icy Sparks (1998), is set in rural post-Civil War Georgia. Fifteen-year-old Dalia Miller is the center of an unhappy household that includes her alcoholic father, Monroe; her distant mother, Violet; and her blind younger sister, Nellie Ann. Monroe is proud of his turpentine business and the group of workers that labor and live in his woods, but his wife and daughters find him coarse and unbearable when he drinks. An honorable but flawed man, Monroe tries to make amends to his family for a mistake made long ago. When Dalia discovers what this mistake is, her ambivalence toward her father turns to hate, and her actions further splinter the family. Eventually, Dalia finds herself alone and all but penniless, and she believes the only solution to her situation is to find a wealthy man to marry, though this does not lead to either the happiness or the stability she craves. Anchored by several complex, intricately drawn characters, Rubio’s novel paints a rich portrait of the late-nineteenth-century South.”

“.... A third Kentucky novelist, Gwyn Hyman Rubio, earned national attention for her first novel, Icy Sparks, which not only was a best-seller, but also an Oprah Book Club selection. The Woodsman’s Daughter, her second novel, is in many ways more ambitious, with an epic story set in the piney woods of Georgia. Rubio, who lives in Versailles, is not only a gifted storyteller; her use of the language is invariably just right.”

“When your first novel is an Oprah Book Club Selection and a New York Times Notable Book of the year, it’s a daunting task to come up with an encore. So if you’re wise, you create a novel different enough from the first that makes it unfair to invite comparison. Icy Sparks author Gwyn Hyman Rubio succeeds both with this and with the tale in her latest, an epic multigenerational family saga.”

Kay Vincent, Bohannons’ Books With a Past, Georgetown, KY

Rubio—the author of Icy Sparks—has created another memorable character and story. The setting—1800s southern Georgia—is different from our own, but the anguish and conflicts of the characters are universal.”

“Do it again,” Nellie Ann cried. She laughed and opened her mouth even wider.

Dalia plucked another grape from off the bed of vines and, narrowing her eyes as though peering through the scope of a rifle, reared back on one arm, then, lunging forward, pitched with all of her might. The grape curved upward and dropped, bull’s eye, into her sister’s mouth.

Nellie Ann wrenched her lips together, sucked greedily, and spit out the skin. “I want more!” she yelled, as a scuppernong ricocheted off her arm. “More,” she spluttered. “More. More. More.”

Dalia kept it up, hurling a volley of champagne bullets at her sister’s lips, wounding her face and splattering her shirtwaist while she hopped up and down, swatting the air with her cane.

“Not so fast!” Nellie Ann shouted. “Throw them slower.”

Dalia snipped off a scuppernong that was near to popping. “Be still,” she said. Nellie Ann thrust her neck out and upward, keeping her mouth open like a hungry baby bird. “Here it goes,” Dalia said, heaving the grape over the trellis. It shone golden in the sunlight before hitting the dark crater of Nellie Ann’s mouth.

Pleasure softened her features. With puckered lips, she whooshed out the skin. “Thank you,” she said.

“It was my pleasure,” Dalia answered, plucking a grape, popping it between her lips. She slurped, smacked, and spit the tough peel out—those little stabs of jealousy completely forgotten when she caught sight of Nellie Ann, squatting, her hands dipping down like fruit bats, her fingers finding a scuppernong in the grass, shoving it into her mouth as though it might be her last.